skip to main | skip to sidebar


Once upon a time, a man named Vuk Karadžić decided that in Serbia, people should write the way they speak. That got things a bit Vuked up, so to speak, and still foreign names are commonly transliterated to cater to the Serbian ear. See if you can recognize these people:

And if you don't believe it, perhaps you can read about it in the...
﻿

Asperger Syndrome: Fear And Loathing in the train from Belgrade to Lubljana

I love people, as long as they come either in book form or behind glass. Right now I’m in the train from Belgrade to Ljubljana, with a whopper of a headache, suffering from sensory overload like there’s no tomorrow. Behind me a kid is screaming. Next to me a sweaty woman is eating salty sticks from a crispy bag, looking unfathomably stupid and is cruising for a hit in the neck.

“Love is being brave,” says my wife next to me.

“Don’t talk to me!” I snap back. Everybody in the train looks at me. I’m a bad husband. It says so on my forehead. I probably beat her too and torment my mother in law. No folks, I’m just an aboulic alien with Asperger Syndrome. I’m daddy cool in perfect silence but when herds of humans crowd me and yalp like an obsession, and crisp crunchy bags and sweat from all their vile orifices, I become my vicious alter ego. I snap, I snarl and pretty soon I’ll turn homicidal.

Earplugs in my head, sunglasses on my nose, typing away just to have something to focus on. They say Asperger Syndrom is a blessing, and while I’m busy counting, I believe I’m going to wield my super mental powers to hypnotize the lady next to me into murdering the kid behind us.
No comments:

Steven's Blog: Whitehorse to Dease lake, in the rain, but with a ...

Steven's Blog: Whitehorse to Dease lake, in the rain, but with a ...: Some more beautiful views, first on the alaskan highway A waterfall, very clear water and it tasted great And my first bear, eating gra...

A Movie in the Can is just a Commode Away?


The VH1 jingle is beginning to bug me. VH1 is not exactly our favorite channel, but we have friends come over all the time and the dog ate the i-Pod. And that makes VH1 our last refuge.

VH1 is the latest spawn of the MTV network. MTV, you’ll remember, was once a station that broadcasted groovy music video’s, then discovered Beavis and Butthead and swiftly regressed into a colorful crypt of never-ending adult cartoons. That didn’t sit well with music-lovers, and aiming to please, MTV begat VH1.

And VH1, even more than MTV, repeats the same jingle every twenty minutes, and has been repeating the same darn jingle since time immemorial. And in that jingle occurs a dude, and that dude sings something that sounds very concerned. It lasts only a few seconds, so I didn’t have much to go on. Because who is that dude? His clip is monochrome, his music is kinda rough, but he’s obviously trying to be some kind of clown, prancing about with his long dreadlocks flopping. I honestly thought his song was a spoof. Because, quite clearly, he expressed his concern about technology taking over our most sacred and peaceful places.

Well, I liked my version better.
No comments:

Christian mercy for a postal guy

I was forced to yell at a postal worker today. Of course, he deserved to be tarred and feathered and driven out of town at gun point, so I rendered onto him pure Christian mercy, in fact.

Today I became the proud owner of twenty shiny copies of my own novel Cross On Me. My publisher shipped them over; the boxes carried stamps from at least five countries on three different continents. I live in , where, apparently, every parcel from abroad is yanked apart and inspected. The postal guy who inspected my parcel, while I was standing at the window waiting for it mind you, decided that a mere visual inspection wasn’t enough. He tried bouncing them off a rusty steel bar that ran over his head, he smelled them, folded them, rolled a few up like phone books, opened one to the scene where the protagonist attacks God with a baseball bat and sneezed on it. If I hadn’t stopped him I’m sure he would have wiped his behind on them.

Luckily for all of us, the guy didn’t understand English well enough to understand precisely what I was promising to do to him if he didn’t hand my good over right away. But he got the right away part. And I got to yell a bit, and that’s always nice.

Yes, Serbian Women Are Beautiful | Serbia's Ambassador To The ...

Yes, Serbian Women Are Beautiful | 's Ambassador To The ...
There are beautiful but also so kind:) ... Arie Uittenbogaard Says: And kind too, usually.... Marko Markovic Says: Have some respect for your country Karl... please ...
http://www.ambassador-serbia.com/2011/08/27/yes-serbian-women-are-beautiful/

The curious case of the missing football guy


My good friend Leonne is seven years old, which means that I usually have the drop on him. He screams louder than me but I can reach the candy jar. He is endowed with all the charm, but I can explain things in grown-up speak, which frequently leads to my acquittal and his inculpation. That’s quite alright because he is always the one who gets us in trouble in the first place.

By some path of gruesome injustice, Leonne recently acquired a brand-new football game; one of those green tubs with burley football guys standing stoically on springs. The original idea seems to be that the players patiently place one ball somewhere in the tub and then take turns pweeioning the football guys so that they propel the ball towards the other player’s goal. Foolishness, of course.


Leonne and I - surely inspired far beyond the compass of the original designers - emptied the canister of spare balls onto the field and made it the game’s goal to hit our opponent in the head with either a ball or else one of the football guys, who for some reason came loose en mass about ten seconds into the game and were flying like wounded sparrows all over the place.
I was winning. And that generally doesn’t sit well with Leonne, who asserted with some force that the balance of power was tilted due to one of his football guys being AWOL. I scored. Leonne wailed. I was awarded a hit from the candy-jar. Leonne wailed even louder. Leonne’s mother came whirling in, ready to split some wigs and serve justice and was pelted by a virtual cloud of little plastic footballs and football guys until she retreated and let us go back to doing guy things.
The missing football guy was found sticking out of a wad of cookie dough.

Now Released: Cross On Me – A Novel By Arie Uittenbogaard 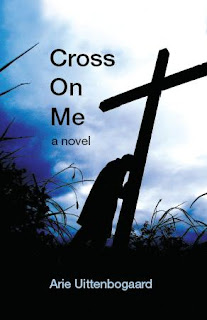 A brilliant man flees from reality and drives in a panic from scientific to the wilderness of . When his father learns of his son's plight, he sets out to find him. Before they can meet again, both men must pay an ultimate price.
In his ambitious, literary epic, Dutch-born author Arie Uittenbogaard shows the north American continent through the eyes of two displaced foreigners who are desperately looking for each other. Their quest takes them from the latest scientific findings to the ancient wisdoms of the Bible, from the Dutch city of to the arctic , from the howling infinite of fiction and the squalls of madness to the folly of knowledge and the essence of redemption.
Cross On Me follows the trail blazed by Dante and Bunyan, and shows a modern day and unlikely Nazarene whose powerful father has to relinquish everything, follow his son into his grave and raise him from the death he died.
Arie Uittenbogaard is a former maritime engineer who moved to to study theology. He worked on cargo and cruise ships and spent most of his summers in . Today he and his wife live in and .
Arie Uittenbogaard publishes Bible studies, short stories and poetry in both English and Dutch. Cross On Me is his first full length novel in English.
Cross On Me was published by Abarim Publications and printed by iUniverse. It is available from online booksellers such as Amazon.com, Borders and Barnes and Noble. Cross On Me can also be read entirely online at http://www.crossonme.com/.
No comments:

This animation is worth watching to the end.

What is a backlink and why is it important to the money blogger?

A backlink is a link on somebody’s blog to somebody else’s blog. Since counting backlinks is one of the many ways through which bots estimate the quality or popularity of a blog, understanding the art of backlinking is essential to the successful blogger. Here are some tips:

Backlinks are originally meant to point a reader to logouts that are even more interesting than the one you so painstakingly composed. All very noble of course, but the aspiring money blogger is ultimately more interested in the benefits of back linking than in the needs of a visitor. A money blogger’s goal is to have the visitor exit the blog through an ad but of that can not be achieved, then let it be through a backlink that is designed in such a way that it generates more traffic than it loses.

All bloggers are interested in how their blogs are perceived on line. A link from someone else’s blog will be shown in all kinds of reports, and a blogger who is so novel as to burst out in hallelujah’s at discovering that he’s linked to, will follow the link back to you. If he then discovers that his link sits in a paragraph full of praise, he might favor you back with a link of his own. The key here is to find a new but good blogger, who appears to be serious and qualified enough to bring his blog to a success. A link to your blog from a super blog weighs much more than 10 links from a bunch of nobodies.

The obvious hidden message here is that when you link to an article fro the New York Times, nobody over there will come to you, and you will only lose visitors. So yes, link to CNN, the Huffington Post or the Discovery Channel if you seek to educate the masses. But link to a first year student of journalism or a blog that automatically shows the backlinks if you want to earn money.

Or read Cross On Me entirely on-line for free!